The System is Shutting Down: A Coyote Run Race Report

I didn’t realize it at the time,  but I’d been on a death march for the last hour and when the trail briefly left the shaded canopy and led me across a short stretch of open field full of wildflowers, the sun bore down on me like a lazer just long enough to push my body over the brink. I stumbled along and made it back into the shade zone and suddenly knew I was either going to lie down or pass out. Scanning the ground for snakes, ants and cactus, I surrendered.

The morning had started off at the perfect temperature and low humidity. My race started later, 8:00, so I had plenty of time to get ready and walk from the campsite to the start, chat with people, and line up with no stress. I had slept well in my tent on an air mattress, cozy and warm in my sleeping bag, listening to the sounds of wind in the trees. I woke up in plenty of time to drink coffee, eat a banana and a rice cake, drink water, and go to the bathroom. However, I had not had to go pee during the night and that should’ve been my first warning sign, but instead I was just glad I hadn’t had to leave my tent.

Cleburne State Park is located about 45 miles south of Fort Worth, Texas, and 231 miles north of my house. It’s a very beautiful part of Texas and a lovely park with a nice fishing lake. The trails go around the perimeter of the park and also there are some very twisty, hilly mountain bike trails. The race course was two loops of about 8.4 miles  with somewhere around 1200 feet of elevation gain per loop, according to the race director. This is quite amazing considering there are only a few slightly big hills and the rest is just constant up and down, small , but steep hills. As you can see in the Strava report, there are very few flat sections. 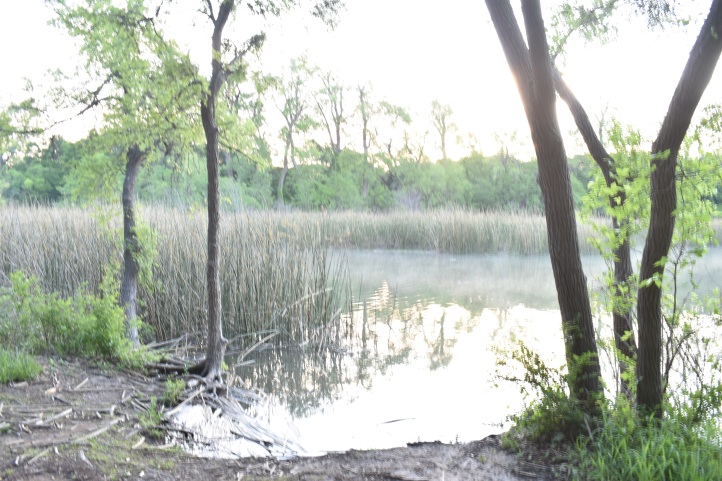 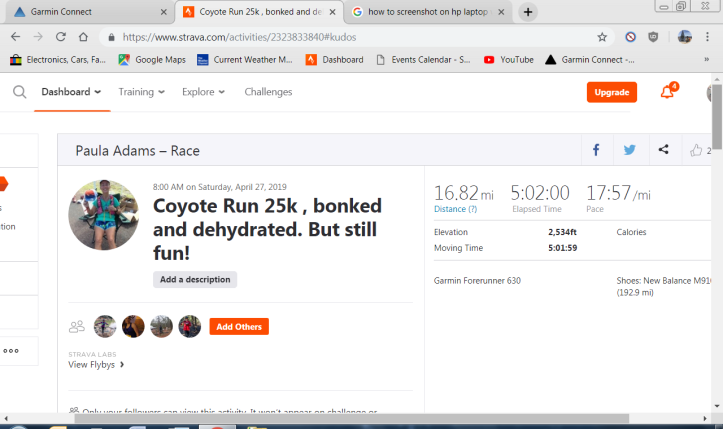 So how did I end up lying on the ground? I made a series of rookie mistakes, but I am not a rookie, so I feel pretty dumb and mad at myself, but my only excuse, and some of you will understand , is that I had some pretty bad brain fog leading up to and during the race. Brain fog as in, staring into space a lot, not able to think well, spacey,  mostly on auto-pilot. I suppose it was a combination of stress and hormone imbalances. I was happy to have some decent energy at the start , at least for a couple of hours, until things started breaking down.

Our bodies are basically just machines, or are machines modeled after our bodies? Either way, I had two major system failures and one mechanical breakdown. Here’s the thing. A car cannot run without water in the radiator and gas in the tank, and neither can a person. Evidently I had used up all my water and fuel on the first loop. I was feeling pretty good and started off confidently on my second loop. My body started flashing LOW FUEL at about mile 9, but I often struggle at that point, so I didn’t take it seriously. I ate a gel around mile 8 so I thought to myself, I’ll drink a Red Bull at the next aid station. But I didn’t realize I was falling way behind in my electrolytes. So I got to the aid station and they only had sugar-free Red Bull. I wanted regular, for the carbs! That threw me off. So I drank a couple ounces of Coke and ate a few jelly beans and took off. They asked me if I wanted ICE in my bra and I said, oh it’s not that hot. Second warning that I missed. I had been running in the shade all day so I had not noticed that it had gotten into the low 80s. It was also low humidity and windy, so it felt pleasant!

However, I was actually soaking wet from sweat and my body was covered in powdery salt. I took off from the aid station eating the jelly beans and a couple minutes later I went to take a drink of water and , oh no,  that was my last sip! I had made a grave mistake and forgotten to refill my water. I thought to myself that I could make it through the next 4 miles without water. Dumb! I should have turned around and gone back to get water, or actually Gatorade. But….I didn’t want to waste time. Dumb! That would cost me an hour later.

The second half of the course is the hard part with the steepest and most hills. So not only was I getting more and more dehydrated, I was using up tons of calories. Thank God, sincerely, that it was mostly in the shade. I would not have made it in the sun. I started noticing that I could barely make it up the hills. I could kinda run the flats and downhills, but when I tried to go uphill, I was barely moving, and feeling weird. There were two young guys who were also struggling and we  linked up and tried to help each other for awhile. One of them shared a little water with me and I remembered I had some Saltstick Chews in my pocket and we each ate two of those. That probably enabled me to keep going a bit longer. Two chews have a total of 100mg of Sodium and 30mg of Potassium, not that much. But about one mile from the start, I could no longer even keep up that slow pace with them and they left me, not knowing how bad I was doing. I’m sure they would have gotten me help, but I didn’t know I needed it.

So I kept struggling along as fast I could , just trying to get to the end and water, but each hill was getting harder and harder because my legs started cramping up. I honestly did not realize how depleted I was. I think as an ultrarunner, and a mom, and my personality, I am just used to pushing through difficult times on sheer willpower and determination. But this time I couldn’t. Finally I hit that open field and that’s when the lack of electrolytes, calories, and hill training all came to a critical point and I began to shut down.

I’m not sure how long I was lying there before my first trail angel came along. Not very long I think. He was not a runner, but he had a runner out on the trail somewhere and had come out to find them or something. I barely opened my eyes, and my ears were very stuffy from the dehydration. What I remember is that he was asking me if I was okay and I said I was dizzy. Some runners came by and they gave me ice to hold in my hands and put some on my chest and neck and they gave me some Sportbeans (like jelly beans with a little electrolytes) to eat. The trail angel didn’t have any water and neither did they, as far I can recall. I think I ate some ice. I had some terribly painful calf cramps and the angel and a female runner helped massage my legs. The ice and rest revived me enough to get up and, from my Strava report, it looks like I got up after about 13 minutes. The trail angel found me a stick to use a trekking pole because I was still very weak. I thanked him,and stupidly told him I was going to be fine. Dumb! I needed more water!  He sent me hobbling along. ( He found me after the race so I was able to tell him how grateful I was for his help.)

Well, I thought I was almost to the finish,  but in fact I had further to go than I thought and a bunch more hills. Every hill was so difficult and my legs wanted to seize up , so I had to step sideways to not trigger the calf cramps. After a bit I came to another open field and there was the photographer, so there may a picture of me with my walking stick. At this point a nice lady offered me the last couple of ounces of her water and I gratefully drank it. That was the third time I’d had to drink out of a stranger’s water container. I didn’t care. It was drink or pass out! The trail seemed never-ending and yet I was so close to finishing.

As I was making my way, feeling mad at myself and sad about my second loop being so slow,  the race medical director came along looking for me, after having been alerted by the runners who had helped me. I thought I was doing better but then suddenly I was seized by a massive calf cramp and had to sit down and then I started hyperventilating. That was a first for me and it surprised me! Thankfully I was able to catch my breath and he was able to massage my legs and help me stand up again. That was one of the scariest moments I’ve ever experienced in a trail race. After that he told me to only take small steps and I did because I didn’t want to go through that cramp hell again. Slowly, but surely we topped the last hill and the trail leveled out and I was able to walk mostly normally, but still gingerly.  I walked across the finish line, got my medal and a big hug from Rob, the race director. I went straight to the aid station and put about 20 ounces of Gatorade in my pack and drank it. I kept drinking various things, like pickle juice and water,  and eating pickles and  potato chips until I felt a little better. Amazingly I never got nauseous during that ordeal. After I knew I was okay, I went back to my campsite to rest and recover.

So what did I learn? A lot!

Even now, two days later, I am so thirsty. I’ve had all kinds of salt and water and food and slept two nights, but I’m tired and my muscles are sore from the cramps. The one good thing is my quads are not very sore, so I guess I did okay on something. I really enjoyed running the downhills.

What I did right: I didn’t run too fast. I did do some good hill training, just not long enough runs. I ran my own race. I handled the rocks well, so I must be getting used to them. I did not fall down! I talked to lots of people , before ,during and after, so I did my socializing . I really had a good time and enjoyed the whole thing, minus the last two hours. I’ll do better at this race next year. I consider it a win because I finished and also it was a good lesson because I have a very, very hot 50k coming up and I want to finish healthy!

The photos below are clickable links to Amazon. I will receive a tiny fee if you purchase these products.

I'd love to hear your thoughts! Cancel reply